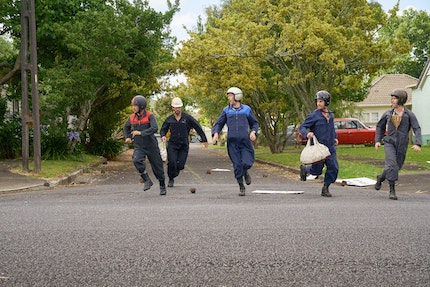 Ted gets one final crack at the South African money. Wolf’s at war with his parents and the rest of the country are at war with themselves. Ted’s simple plan to get his hands on the South African money gets mighty complicated on the final day of the tour. Carol has an idea to get pregnant without Phineas’ sperm. Belinda’s unhappy with Rita about the missing jewelry as the fallout from Evan’s job continues. Ngaire calls Lefty on being a rat and files for divorce. Wolf’s loyalty to Evan complicates Ted’s plans. Evan reneges on selling land to the South Africans with tragic consequences for Des. Ted’s gang joins the anti-tour movement for the afternoon as a cover to steal the money while the South African’s are at the game. Ngaire moves in with Mike, but an armed Lefty lurks. Ted and Rita finally get their hands on the riches, but have they lost a son?